Tour Homes Built by Some of North Georgia’s Finest Craftsmen. 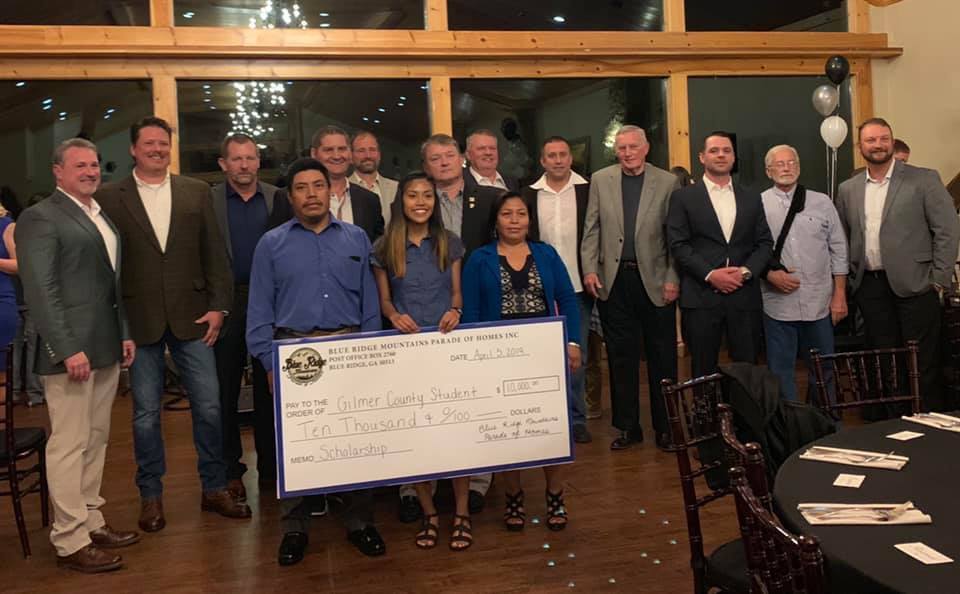 Eight builders, nineteen unique homes, some within minutes of downtown Blue Ridge, all with an upscale mountain look and a mountain background, fueled the excitement for the dinner kickoff at Willow Creek Falls & Vineyard Friday evening.

Custom-made canvas paintings of the homes presented to sponsors and other select individuals was an unexpected bonus. Dinner food was exceptional and Rob Harper never sounded better. And Keith Sumner was a masterful speaker for the event.

But none of those things was the BEST part of the first Parade of Homes in this area. The most exciting thing about Friday evening’s dinner was when these builders and sponsors announced that they would donate $20,000 (before they even sold the homes they had built for the Parade of Homes) and award $10,000 scholarships to two students in the area who planned to enter the construction field after graduation. This was the BEST!

Those honored for setting a foundation of success in the building industry included Jim and Joe Sisson, Roy Quintrell and JP Jones.

This year’s event was birthed from an idea first seen in Mountain Living Magazine in Breckinridge, CO. Sumner, along with Ron Harbin, began attending the event to gain ideas. A partnership year down the road with Log Cabin Magazine gave the inaugural event the momentum it needed.

Over the past nine months, the purpose of the event evolved, picking up support when builders and board members realized a surplus in funds from sponsorships and ticket sales gave them a chance to reach out to the community.

Sumner said, “We decided this isn’t about the beautiful homes and gaining a dollar here and there. It’s really about something a little bigger than us. When we decided to take our proceeds and give it directly back to the students of Fannin and Gilmer counties (who planned to enter a similar field after graduation), the sponsorship money started rolling in.”

One of two $10,000 scholarships was presented Friday evening. Norma Solis from Gilmer County High School, and a carpentry student of Dennis Wilson, was nominated to receive one of the Blue Ridge Mountain Parade of Homes scholarships. The Fannin County student is yet to be identified for the other $10,000 scholarship.

Solis said, “I just want to say thank you to everyone. This will definitely open new doors for me. Coming from a family of nine siblings and as the first one to graduate high school…I’m so grateful.”

Wilson said of Solis that she was a team leader in the last level of the carpentry pathway. She excelled, lettering academically as an honor student, five years in varsity cross country, four years in track and field, and landed in the top 10 of Skills USA for architectural design (the area she plans to study in college).

Her academic abilities, leadership skills and interest in architecture made her a prime candidate for the inaugural scholarship, Wilson and Sumner agreed.

Sumner took a few minutes to talk about his history in the building trades. He said his grandfather entered the building industry nearly 100 years ago, followed by his father and uncles. And now him. “When you look at the building landscape today, these guys are not building houses, they’re building people’s dreams,” he said.

“Things did not start this way in North Georgia,” he added. “In the mid-1960s and 70s, Joe and Jim Sisson came to Blue Ridge, Elljay and North Georgia, along with Roy Quintrell, bringing growth to the area.”

Jim Sisson said, “We have come a long way since the people from Miami came up in the mid-1950s and built cottages near the rapids on Aska.” He added that Roy Quintrell then came to the area in the mid-1980s, building My Mountain and Mountain Tops; and JP Jones built houses and developed land on Aska and Deep Gap.

“I planned to say when I came up to the podium that you’re looking at the heart of the economy of Blue Ridge. But I modified that a little bit. THIS is the heart of Blue Ridge – and we’re grateful to all of you.”

As the evening wrapped up and music filled the room, the builders prepared for the following days’ events.

Special recognition was made to Pete and Kim Folger as the title sponsor for the Parade of Homes. Sumner then added, “To all you sponsors, we could not have done this without you guys who are hopefully going to help us change the landscape of Blue Ridge as far as real estate commerce goes.”

Three other community supporters on the Blue Ridge Parade of Homes board include Charlie Sisson, Chris Cowart and Terry Wilson. While they were not builders benefiting from the event, Sumner said they attended weekly meetings, participated in planning, and added a different perspective to the events.

Sumner closed, saying now the Blue Ridge Parade of Homes board is moving into its second phase of scholarship fundraising. Throughout the year, they will launch the Blue Ridge Concert series with the help of Ken Wilson. Mark Wills will be among the headlining performers.

“We’re not playing; we’re serious. We’re going to give back to this community. We’re very blessed and it’s our job. We’ve got to give a little back,” Sumner said.